Two salt lakes are very pink due to algae that release a red pigment in certain metatheological conditions. The microclimate created the largest salt lakes in Europe in the cities of Torrevieja, Spain.  Pink salt lakes of Torrevieja, are caused by the presence of salt-loving archaea - halobacteria genus Halobacterium, as well as a single living organism on the planet Earth can exist in water with a high concentration of salt - Dunaliella salina algae Dunaliella green saltwater.
https://www.spain-holiday.com/Alicante-province/articles/alicantes-pink-and-green-salt-lakes

The Governor of Florida issued a state of emergency in response to this year’s excessive red tide, the toxic algae bloom spreading across the West Coast of the Sunshine State and leaving beaches covered with piles of dead marine wildlife.

"I am issuing an emergency declaration to provide significant funding and resources to the communities experiencing red tide so we can combat its terrible impacts," said Governor Rick Scott in a statement on Monday.

From Southwest Florida in Fort Myers all the way up to the Tampa Bay area, red tide is plaguing Florida's normally beautiful beaches.

As you may have concluded, we have a high level of interest in the dynamics of algae, lichen, and moss infestation, and their impact on our lives.

​We sincerely hope your investment of time here on our website has increased your knowledge and has helped you make the decision to contact us.

the House Shampoo low & high pressure, proprietary, solution application processes, and the many ways your property

will benefit from our unique approach to cleaning, restoring, and maintaining your investment.

All the staff at House Shampoo would like to thank you for considering us.

We look forward to earning your business and becoming your dedicated cleaning and restoration contractor.  ​

Often disregarded as "pond scum," algae gets a bad rap for good reason.

Alternately, algae might also be the most underappreciated of life forms

(when it's not being a nuisance to our property and our health).

In fact, algae are primary producers of organic matter at the base of the food

chain and as such, life as we know it probably wouldn't exist without them.

While most algae are microscopic, when they amass they are 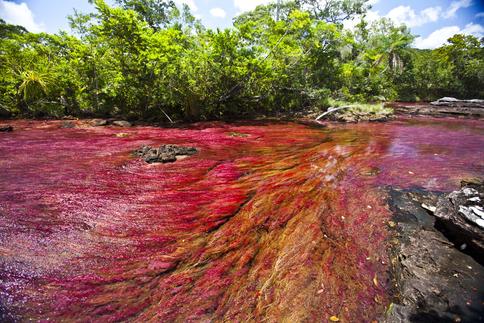 Let's not forget aboout the moss ... 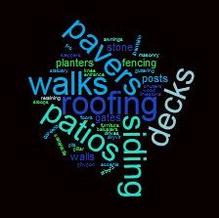 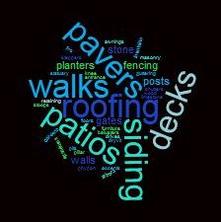 Algae & Moss - The Good, The Bad And The Beautiful 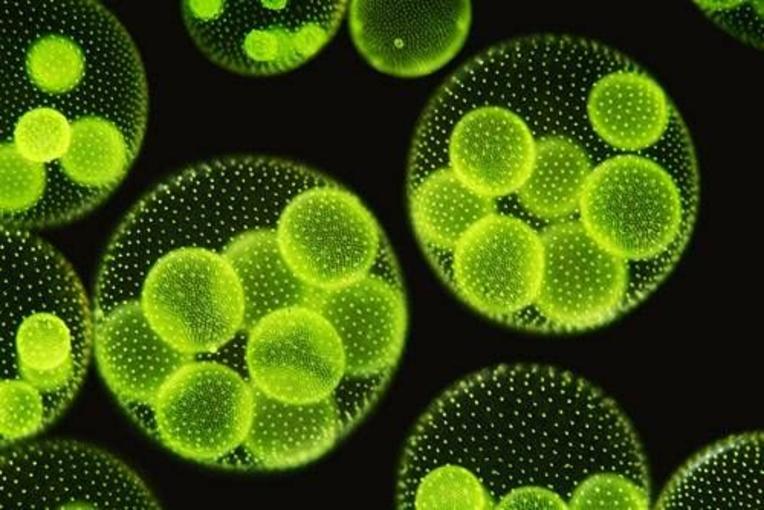 This geyser is only a 2.5 hour drive from Reno, Nevada. It was accidentally created when a well was drilled by accident. The mountain was created by minerals and algae that began to accumulate on the surface.

For more interesting information on algae:​​

"If it needs cleaning, House Shampoo has THE solution!" 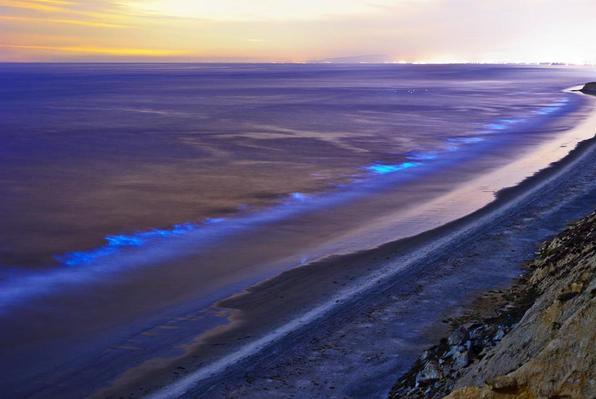 Just some of the communities we serve ... again, please ask!

The National Oceanic and Atmospheric Administration (NOAA) announced today that this summer’s dead zone is the largest ever recorded, measuring 8,776 miles. This is more expansive than the nearly 8,200 square-mile area that was forecast in July. Since monitoring began 32 years ago, the average size of the Gulf’s dead zone measured in at 5,309 square miles.  The Gulf of Mexico hypoxic or low-oxygen zone, also called a dead zone, is an area of low to no oxygen that can kill fish and other marine life. It’s primarily caused by an excess of agricultural nutrients that flow downstream and into surface waters, stimulating harmful algae.​

The largest dead zone ever recorded in the U.S. has appeared in the Gulf of Mexico.

marine life to leave -- or suffocate and die.

And finally, check out this video on the river Cano Cristales before you go ... 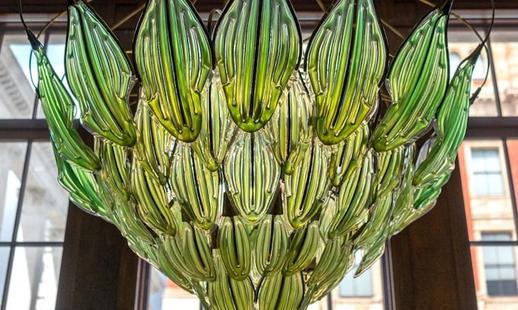 During hot dry weather, the algae proliferate and release a type of toxin known as microcystin,

which can cause liver and neurological damage in humans.​ 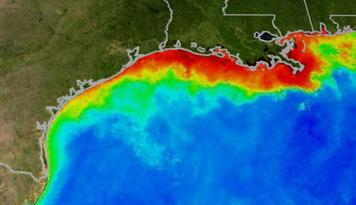 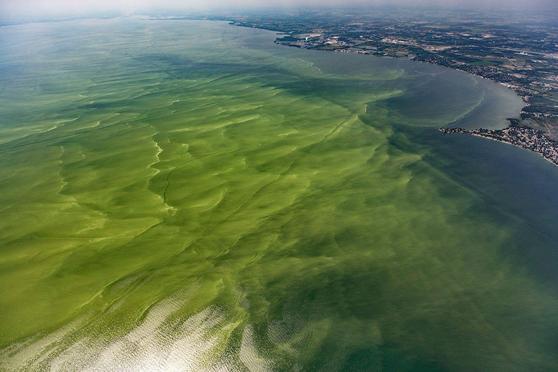 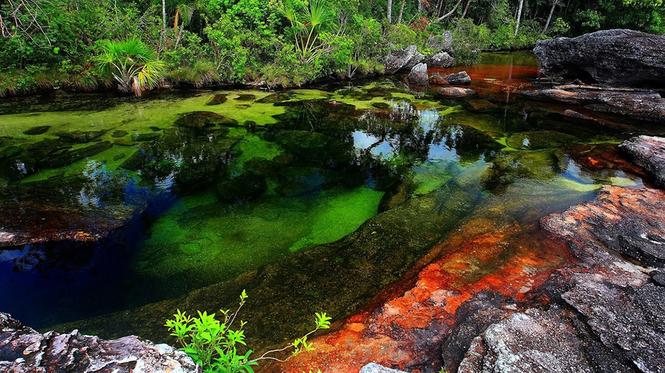 ​From the mountain called La Serrania de la Macarena in Colombia, originates the world’s most beautiful river, the Cano Cristales.  For most of the year Cano Cristales is just like any other river.  Normally we see a crystal clear current of water flowing above a bed of rocks covered with green mosses.  For a brief period of time every year (September to November) the river's water levels dip and the sun's rays provide enough light for the moss to bloom.  It is transformed into a bed of vibrant colors like red, blue , yellow , orange and green. This spectacular natural wonder is also called as the “River of Five Colors” or the “Liquid Rainbow”

Initially people thought that the colors came from the algae and the moss growing below the water. The real reason is Macarenia clavigera, a unique species of plant that grows on the river floor. This plant requires precise conditions the right level of water and specific amount of sunlight and it turns brilliant red. These brilliant red plants cling to the black rocks. The green algae, blue water and yellow sand together produce a rainbow effect. Macarenia clavigera most commonly turn red or into different shades of red from blood red to maroon. They are sometimes light pink sometimes bright pink. The plant is also seen in different colors like bright green, blue, yellow and orange as well giving the river a magnificent effect. 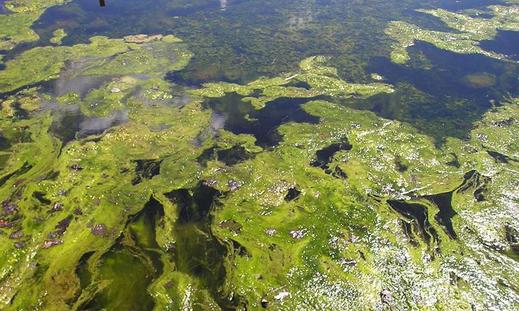 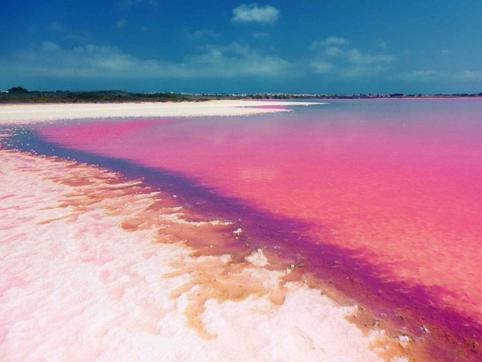 Design engineer and biotechnologist Julian Melchiorri recently came up with an ingenious lighting design that is as beautiful as it is eco-friendly. His “living” chandelier Exhale, purifies air while lighting up your room and was on display at the V&A Museum during the London Design Festival.

The green lighting piece is composed of 70 glass leaves filled with green algae, which absorb carbon dioxide and release oxygen. The transparent liquid filters through light, giving off a warm glow.

​The most magical algal blooms in the world might be those that occur along the southern coast of California, where the shorebreak occasionally glows with an otherworldly majesty. A bioluminescent species of phytoplankton there called Lingulodinium polyedrum emits a neon-blue light in response to stress, causing the waves to light up as they crash.

The photosynthetic pigments in the algal cells determine the color of the algal bloom, and are

thus often a greenish color, but they can also be a wide variety of other colors such as yellow, brown, red, pink, and

even black (roof algae), depending on the environment where they live and the species and type of pigments they contain. 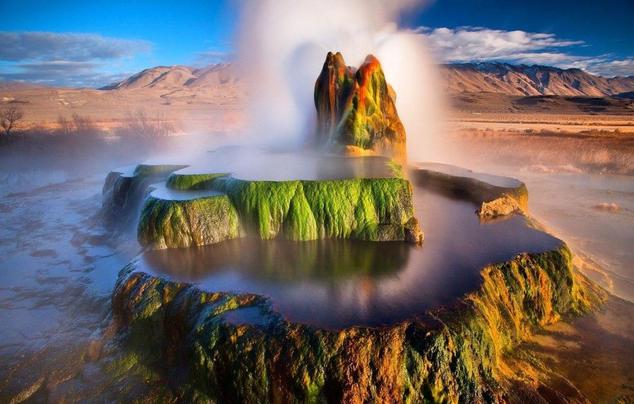 "Our wastewater is actually the perfect environment for algae and bacteria to thrive in a symbiotic circle of life," said Jacob Price a doctoral researcher in Sales's lab. "Nitrate is a common ingredient in fertilizers. Plants use it, along with carbon dioxide and light, through the process of photosynthesis and carbon fixation, to fuel growth. A byproduct of photosynthesis is oxygen, which is used by organisms—like bacteria—for their commensurate life processes. It's a beautifully natural relationship that we can harness to clean our water."

When phosphates are introduced into water systems, higher concentrations cause increased growth of algae and plants. Algae tend to grow very quickly under high nutrient availability, but each alga is short-lived, and the result is a high concentration of dead organic matter which starts to decay. The decay process consumes dissolved oxygen in the water, resulting in hypoxic conditions. Without sufficient dissolved oxygen in the water, animals and plants may die off in large numbers.